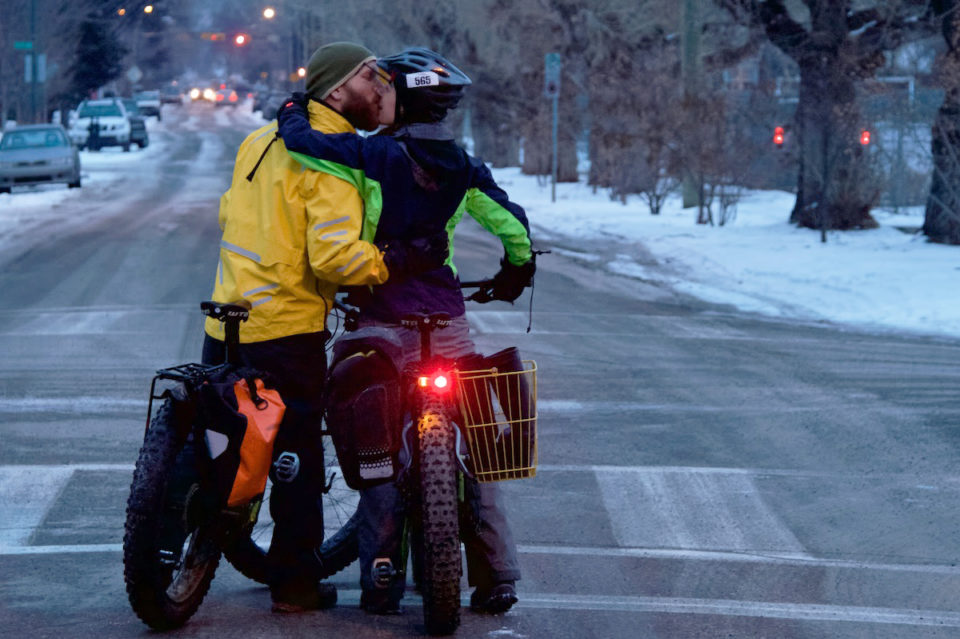 Though colder weather tends to send bikes to the garage for the winter, there are intrepid, frost-resistant Calgarians who commute to work on two wheels. Kim Kelln is one such cyclist. Along with partner Robert Peddle, he’s documented the comings and goings of a few of his fellow winter cyclists in a documentary punnily titled Bicicles.

Kelln initially started the project as a photo essay on winter biking while he and Peddle searched for potential video projects. When one of those projects fell through, it occurred to the pair the photo essay would also make for a great film. Now, after three winters of filming, the documentary is ready to be screened this month.

“The theme of the movie is how normal and everyday biking in the winter is,” says Kelln. “You get up in the morning, you have your breakfast, you put on your clothes to go out on a winter day, and then you ride your bike to work. It‘s part of everyday activity, theres nothing special or unusual about it.”

The subjects interviewed range from the downtown commuter using the cycle track to the parents who bike their children to school before heading to work. Kelln hopes the diverse cast of characters chosen to show winter commuting is not a fringe activity will help viewers realize winter cyclists are everyday people.

“There‘s always been an element within the cycling community – the outdoorsy, athletic kind of people – that get on a bike and it‘s really a form of exercise,” says Kelln. “A lot of the cyclists that we see now are the other side of the spectrum. They’re using their bike as another means of transportation to move them between destinations. They don’t see that winter represents an obstacle to that. They just put on more layers.”

The film also features interviews with city councilors, business owners and biking advocates to piece together why winter cycling in Calgary is becoming a thing.

Though the hardcore cyclists are certainly one part of his target audience, Kelln hopes to encourage those outside the bike community who are curious to try their hand at a two-wheeled commute.

“The infrastructure we’re putting in place, the cycle track, bike lanes, those kinds of things, they aren‘t for the people that are cycling now,” says Kelln. “All that infrastructure is for people who are thinking about cycling but find it too dangerous or intimidating. I‘d like to bring them out to the movie as well.”

Bicicles premieres February 11 at the Globe Theatre. For more information or to purchase tickets, visit biciclesyyc.com.