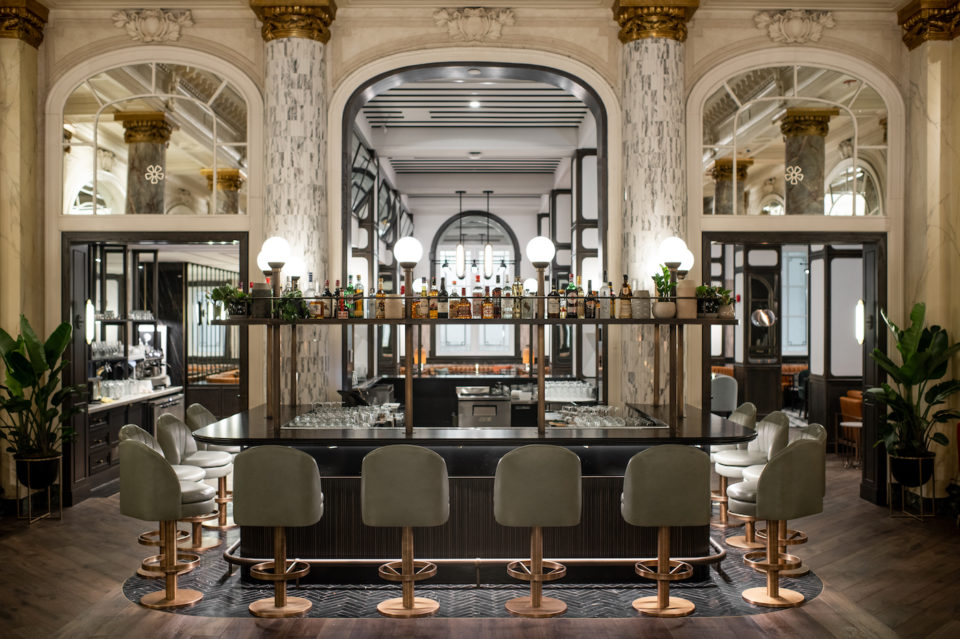 Inside Hawthorn, the new restaurant and lobby bar at the Fairmont Palliser. Photograph courtesy of Hawthorn.

What is it: Montreal-based chain Cacao 70 opened its first Calgary location in Springbank Hill in November 2017. But now, Calgarians can also get their brunch and dessert fix at its new location in Mahogany.

What’s on the menu: Like the other Calgary location, Mahogany’s Cacao 70 features a mix of savoury and sweet brunch dishes, including apple and bacon waffles, omelettes, a Mediterranean frittata and a smoked salmon scramble. But the real showstoppers are the desserts — there are four kinds of chocolate dessert pizzas, seven kinds of chocolate fondue, chocolate and fruit crepes, grilled marshmallows and more.

What is it: The Fairmont Palliser has been an iconic part of downtown Calgary for more than a century. Now, for the first time in more than 60 years, the historic hotel has opened a new restaurant and lobby bar called Hawthorn.

What’s on the menu: It doesn’t matter whether you’re in the mood for breakfast, brunch, lunch or dinner — Hawthorn has you covered. For those stopping by earlier in the day, Hawthorn offers breakfast and brunch dishes like steak and eggs, Belgian waffles, French omelets, a breakfast sandwich with pork belly and more. Later in the day, the restaurant’s selection of shareable plates includes warm house made bread with salted butter, roasted carrots, albacore tuna, hanger steak with frites, fresh oysters and Arctic char. For dessert, the Cinnamon Toast Crunch mille crepe cake is a must-try.

No matter what you get to eat, be sure to order one of Hawthorn’s signature drinks: there’s the Home Grown cocktail (featuring a specially made gin by Turner Valley’s Eau Claire Distillery) and the Hawthorn ODB draft beer, which supports the Calgary Food Bank. Last Best Brewing & Distilling makes this beer with the restaurant’s unused bread.

The space: The hotel brought on Frank Architecture and Interiors to turn its Rimrock Dining Room and part of the hotel lobby into Hawthorn’s new space. The restaurant and lobby bar make a powerful first impression with its marble pillars, stately fireplace and 1962 mural by artist Charles Beil along the back wall. Eye-catching light fixtures, leather banquettes and a mix of coloured and patterned pillows add to the space’s cozy, luxurious vibe.

What else you should know: Hawthorn’s happy hour runs from 3 p.m. to 6 p.m. and again from 10 p.m. to midnight on weekdays.

Pizza on the Fly opens in Brentwood

What is it: Pizza on the Fly specializes in Roman-style pizza. It launched its first location in downtown Calgary in 2018 and just recently opened a second one in Northland Village Mall.

What’s on the menu: Pizza on the Fly’s Roman-style pizza comes in rectangular slices and features a thick, chewy crust with lots of air bubbles. Flavour options include Margherita, Hawaiian, veggie lovers, Fiesta salami and the most popular, Crostino Truffle.

The space: Pizza on the Fly’s second location is located in Northland Village Mall’s food court, so there’s plenty of general public seating.

Read more: Where to Get Roman-Style Pizza in Calgary

What is it: Smoke N Fusion is a new smokehouse by the most recent owners of the now-closed The Fine Diner. It celebrated its grand opening on April 25.

What’s on the menu: Executive chef Kosta Galanos leads the kitchen team at Smoke N Fusion. The menu features house-smoked beef brisket, smoked Korean beef ribs, pan seared kangaroo loin, surf and turf macaroni and cheese, a gouda bacon burger and desserts like deep fried bananas foster. Around half of the menu can be made gluten-free and there are a handful of vegan options too.

The restaurant also recently started offering a brunch buffet on Sundays. Swing by between 10 a.m. to 3 p.m. for build-your-own waffles, lamb Benedict, avocado toast, an omelette station, a brisket carving station and desserts.

The Coup is introducing a new dining experience called Le Petit Coup on May 22.

This New Calgary Cocktail Bar is Inspired by a 1930s Cadillac

There’s a New Fine-Dining Italian Restaurant in the Beltline