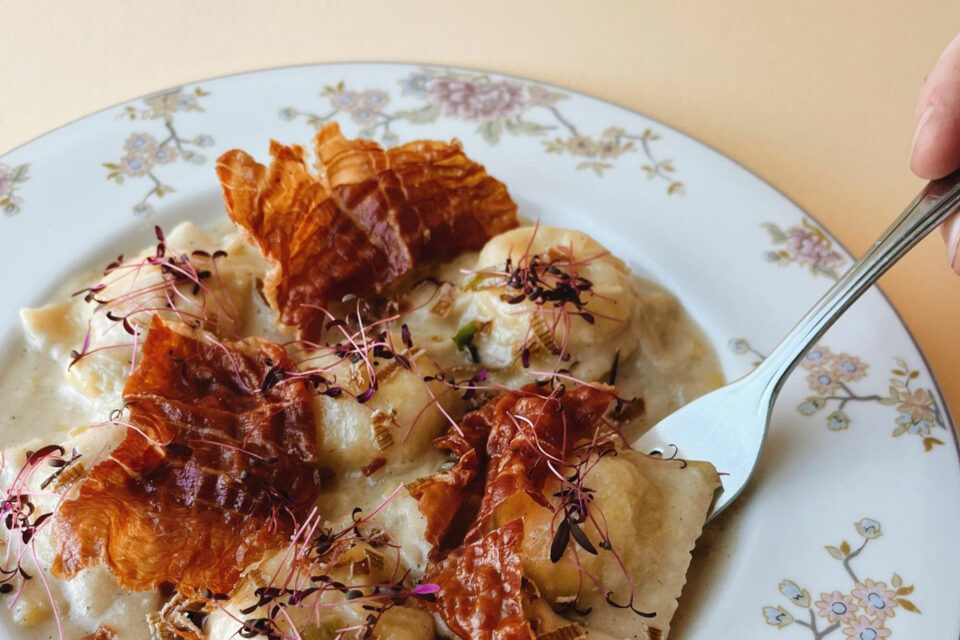 Donna Mac is one of the restaurants participating in Pasta La Feasta this month. Photograph courtesy of Donna Mac.

Check out thousands of carved pumpkins at Pumpkins After Dark

These are not your average jack-o’-lanterns. At Pumpkins After Dark, you’ll see more than 6,000 pumpkins with carvings depicting movie characters, dinosaurs, Halloween figures and more. Walk through the experience to see all the displays at WinSport, enjoy some treats and check out live pumpkins carving demonstrations.

October marks the return of Pasta La Feasta, a local pasta festival where 10 restaurants are offering special pasta creations throughout the whole month. When you order one of the featured dishes, $3 will go towards supporting The Alex Community Food Centre.

Read more: A Month-Long Pasta Festival is Happening in Calgary This October

Watch a movie at the Calgary Arab Film Nights Festival

This year marks the 10th anniversary of the Calgary Arab Film Nights Festival. Held at Globe Cinema, the festival features a full weekend of films that include documentaries, dramas, comedies and short films. Festival passes are $50.

Play some basketball on a new court in Bridgeland

There’s a new spot to shoot some hoops in Bridgeland. Head to Murdoch Park with some friends to play on the colourful new 3×3 Sport Court, which opened at the end of September.

When: Fridays and Saturdays in October

During Calgary Farmyard’s Harvest Lights, you can check out the local attraction at night on Fridays and Saturdays from 5:30 p.m. to 9:30 p.m. It’s a fun way to re-experience Calgary Farmyard, which will be lit up, and its dozens of attractions ranging from mini golf to jumping pillows. The only open attraction that won’t be lit up is the corn maze, so bring a flashlight.

Local improv company The Kinkonauts offers weekly improv workshops. Running on Saturdays from 1 p.m. to 3 p.m., each $5 class is a great opportunity to try something new (the class is beginner-friendly) or improve your improv chops if you’re a more seasoned performer.

Cheer on the Calgary Flames

When: Season home opener on October 13

The Calgary Flames are officially back for another season of hockey. Whether you’re watching in person or on TV, don’t miss the season home opener against the Colorado Avalanche on Thursday, October 13 at the Saddledome. And if you’re looking for a place to eat near the game, we’ve got you covered.

Eat and drink at the Rocky Mountain Wine & Food Festival

Don’t miss the Rocky Mountain Wine & Food Festival as it celebrates its 25th anniversary this year. Full of wine, beer, spirits and a mix of sweet and savoury snacks, this event is as tasty as it is fun. Along with admission, guests will need to purchase sampling tickets at the festival.

The Beltline is now home to Alberta’s largest mural, and you can check out the finished design now. Spanning 15,000 square feet, the mural is called NEOMA and was created by Toronto-based artist Jacqui Comrie.

Celebrate the library’s 110th birthday on Love Your Library Day

The Calgary Public Library is celebrating its 110th birthday this year, and you can celebrate this major milestone starting on October 15. For Love Your Library Day, all library locations will be offering special activities like family story time, live music, crafts, treats and more.

Go on a food tour down International Avenue

International Avenue has a rich food scene, and now, you can explore it on a food tour. Called “The Around the World in 35 Blocks Food Tour,” this four-hour tour stops at several restaurants and food stores along 17 Avenue S.E., giving you the chance to try and learn more about different cultural foods. Tickets are $30.

Grab a treat from The Chocolate Lab’s new downtown location

There’s a new spot to get your chocolate fix on Stephen Avenue. Local chocolate company The Chocolate Lab has opened a new location there where you can treat yourself to some colourful bonbons, buy a chocolate bar or indulge in some hot chocolate.

Wolves: The Art of Dempsey Bob is the third exhibition featured in Glenbow at The Edison, the museum’s satellite location as it undergoes renovations. The first retrospective of Bob’s career, the exhibit features more than 65 carved masks, sculptures and pieces of regalia dating back to the 1970s.

Love scary movies? This year, get in the Halloween spirit by watching them all night during the Calgary Underground Film Festival’s 12-hour Halloween Horror Movie Marathon. The movie night at Globe Cinema will feature seven horror films that will start playing at 7 p.m. on October 29 and run until 7 a.m. the next day. There will be a costume contest, you can buy concession food all night and there will be a free breakfast in the morning.

Grab a drink at a new brewery in Sunalta

Best of Kin is the latest spot to join Calgary’s brewing scene. The brewery, which recently opened in Sunalta, has a full food menu that includes appetizers like smoked chicken wings or dumplings, sandwiches, pizza and dishes like Betty’s “Hamburger Helper” or char sui smoked capicolla pork steak. Wash it all down with beers like the Celebration Sour or the Summer Crush radler.