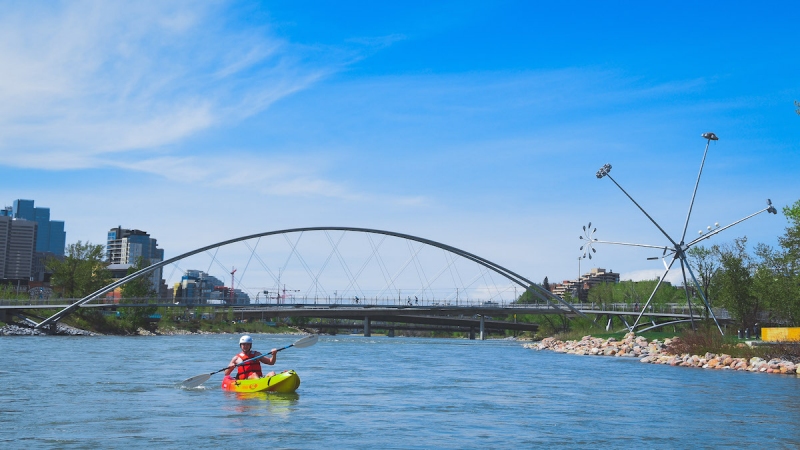 Photograph courtesy of The Paddle Station

Calgary is a great city to live in year round, but it’s at its best in the summer. Not only is that when some of the city’s biggest events like Stampede and Sled Island return for another year, but the weather is perfect for outdoor activities like paddling down the Bow River, cycling and watching outdoor movies. Use this list of activities to make sure there isn’t a dull moment this summer.

Thursday, June 21 – Attend a concert, check out a comedy show or attend a film screening at Sled Island (runs from June 20 to 24)

Monday, June 25 – Have a picnic or barbecue with some friends or family

Tuesday, June 26 – Play Punk Rock Bingo at Ship & Anchor (here’s what you need to know about it)

Wednesday, June 27 – Learn how to salsa (or watch others do it) at Sunnyside Salsa Wednesdays at ContainR

Thursday, June 28 – Get warmed up for Stampede by checking out the Airdrie Pro Rodeo (runs June 28 to July 2)

Friday, June 29 – Watch an outdoor performance of Shakespeare’s The Two Gentlemen of Verona during Shakespeare by the Bow’s run in Prince’s Island Park (runs from June 29 to August 19, no shows from July 23 to 30)

Sunday, July 1 – Celebrate Canada’s birthday at one of the more than 15 Canada Day celebrations in Calgary

Monday, July 2 – Drive out to Okotoks to watch a baseball game between the Okotoks Dogs and the Regina Red Sox

Tuesday, July 3 – Swim in the wave pool at the biggest YMCA facility in the world

Wednesday, July 4 – Pet some felines that are up for adoption at Calgary’s first cat cafe

Thursday, July 5 – Check out the rides and try fun food before everyone else at Calgary Stampede’s Sneak-a-Peek event (Stampede runs from July 6 to 15)

Saturday, July 7 – Make sand castles and play in the water at Sikome Lake

Sunday, July 8 – Fill up on pancakes at one of the dozens of Calgary Stampede pancake breakfasts (runs from July 5 to 15)

Monday, July 9 – Watch a live concert inside of the King Eddy during the Bell Live Series (runs during Stampede from July 6 to 15)

Tuesday, July 10 – Get a strike at National Bowl

Thursday, July 12 – Rent a kayak or raft from The Paddle Station and float down the Bow River

Saturday, July 14 – Join up with other cyclists for a bicycle history tour that runs on Saturday mornings

Sunday, July 15 – Watch the Grandstand Show, which is celebrating its 50th anniversary this year, on the last night of the Calgary Stampede

Monday, July 16 –  Go out for some ice cream at a local ice cream shop

Tuesday, July 17 – Swing by the Market on Stephen Avenue on a Tuesday to do some shopping

Thursday, July 19 – Have a laugh at one of The Tea House’s Thursday comedy nights

Saturday, July 21 – Grab your bike and dress up for Cyclepalooza’s bike prom ride and/or event (Cyclepalooza runs from July 13 to 22)

Wednesday, July 25 – Navigate the corn mazes and check out the petting zoo at the Calgary Corn Maze

Thursday, July 26 – Listen to artists like A Tribe Called Red and Bahamas at Calgary Folk Fest (runs from July 26 to 29)

Friday, July 27 – Splash around at one of Calgary’s outdoor swimming pools

Tuesday, July 31 – Pick your own cherries, Saskatoon berries and blackcurrants at Saskatoon Farm

Movies at the Meadows.

Thursday, August 2 – Check out the new Alex Janvier exhibit at the Glenbow for free (free admission offered every month on the first Thursday from 5 p.m. to 9 p.m.)

Friday, August 3 – Watch a play or improv show at the Calgary Fringe Festival (runs August 3 to 11)

Saturday, August 4 – Soak up the sun and do some shopping in Inglewood at Sunfest

Sunday, August 5 – Watch cyclists compete in the hill climb event at the 2018 Tour de Bowness (runs from August 4 to 6)

Tuesday, August 7 – Play some board games at the Hexagon Board Game Cafe in Kensington

Wednesday, August 8 – Check out a show at one of Calgary’s live music venues

Thursday, August 9 – Buy $1 tasting tickets for snacks and drinks at Taste of Calgary (runs August 9 to 12)

Wednesday, August 15 – Try one of the many water activities in and around Calgary

Friday, August 17 – Sing along at a Dierks Bentley concert at the Country Thunder outdoor music festival (runs from August 17 to 19)

Saturday, August 18 – Shop from more than 50 vendors at the new Farmers & Makers Market on the lawn of cSpace King Edward

Monday, August 20 – Treat yourself to breakfast and meet the four giant pandas that recently arrived at the Calgary Zoo

Tuesday, August 21 – Play some pinball and try the free meal challenge (if you dare) at Pinbar

Wednesday, August 22 – Shop at the public market and take your kids to the active learning park at Granary Road

Thursday, August 23 – Try to reach the top of the the outdoor climbing wall at Calgary Climbing Centre’s Rocky Mountain location

Friday, August 24 – Go on a tour of the Yamnuska Wolfdog Sanctuary

Saturday, August 25 – Cheer on the colourful procession at the Carifest parade

Monday, August 27 – Up your supper game by taking a cooking class

Wednesday, August 29 – Try your hand at disc golf on a new 27-acre disc golf park along the Rotary/Mattamy Greenway

Thursday, August 30 – Take a tour to see 12 new murals in the Beltline during the inaugural BUMP Festival (runs from August 30 to September 1)

Saturday, September 1 – Watch a barbecue competition at BBQ on the Bow (runs from September 1 to 2)

Tuesday, September 4 – Do some people watching from a patio on 17 Ave. S.W., Stephen Avenue Walk or Mission

Thursday, September 6 – Learn how to 3D print, weld and do woodworking at Fuse33 Makerspace

Sunday, September 9 – Go for afternoon tea at a local restaurant

Thursday, September 13 – Learn how to “hack it” at Telus Sparks’ Adults only Night

Saturday, September 15 – Dress up for the Boo Crew Costume Party during this Halloweekend at Calaway Park (Halloweekends run from September 8 to October 8)

Sunday, September 16 – Order a pint at one of the new breweries that have opened in Calgary this summer

Monday, September 17 – Rent a bike and ride around Calgary while it’s still nice out

Wednesday, September 19 – Check out a 12-foot lotus flower that lights up to the beat of your pulse at Beakerhead (runs from September 19 to 23)

Thursday, September 20 – Check out some movie screenings at the Calgary International Film Festival (runs from August 19 to 30)

Friday, September 21 – Go to the Calgary Night Market’s final outdoor event of the year before it moves indoors for winter